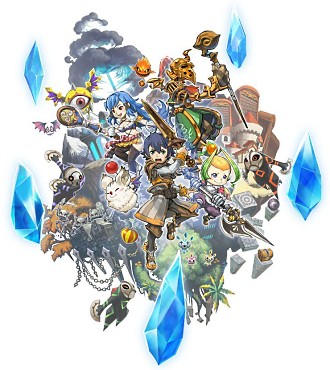 The third game in this series of spinoffs from the neck-severingly popular Final Fantasy franchise, which was released on both DS and Wii. Unfortunately, the Wii version was a straight port of the DS version, which lead to half the screen being taken up by the map. Gameplay is very similar to Ring Of Fates with only slight differences.

Echoes of Time is more of a spiritual successor to the first game than Ring of Fates, as you create the main character and their teammates, selecting the name, race, and gender. The story starts with your character going through their coming-of-age ceremony in your little secluded forest village under the blessing of a gigantic crystal, when a young girl in your village gets Crystal Sickness. The village doesn't have a cure for this rare disease, so you have to go to town to get it. But everyone in town says that your village shouldn't exist...

There is also an extensive multiplayer mode, which unlike Ring of Fates, can be played over the Nintendo WFC in addition to the local wireless. You can play with friends or join a party of random strangers, both in your country and worldwide.

Surprisingly, both Sherlotta and the Undead Princess make an appearance in World of Final Fantasy, a Mon-centric Final Fantasy game, and Sherlotta is later chosen as a representative of the goddess Materia in Dissidia Final Fantasy: Opera Omnia.