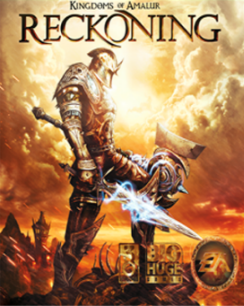 "From the beginning our fates were sealed. Decades of war gave rise to a new enemy. The losses were great. But one would die and be reborn. A hero with no fate but many destinies."
Advertisement:

Kingdoms of Amalur: Reckoning is an Action RPG developed by Big Huge Games (Rise of Nations, Rise of Legends) and 38 Studios, founded by baseball legend Curt Schilling and named after the number he wore whilst playing for teams like the Philadelphia Phillies, the Arizona Diamondbacks, and the Boston Red Sox throughout his career. The game features the efforts of three "visionaries": a story written by fantasy author R.A. Salvatore, a lead artist in Todd McFarlane and its lead designer Ken Rolston. Schilling, a long-time MMO gamer, provided the money thanks to his time spent in the MLB... or at least, somebody's money was involved

For centuries, the world of Amalur was one where fate could not be altered and your destiny was sealed from birth. When a Fae by the name of Gadflow and his immortal dark army called the Tuatha Deohn appear, the threads of fate began to show that no one would be able to stop them from conquering Amalur and plunging the world into darkness.

Salvation comes in the form of the Well of Souls, a gnomish experiment to bring soldiers Back from the Dead. It's only worked once, on the Fateless One, but it's enough: they have become Immune to Fate as a side-effect of their resurrection. As the laws of the world begin to unravel and order descends into chaos, the Fateless One must rise to the challenge as the only person capable of defying fate and Saving the World from the grim future that lies ahead.

The game forgoes choosing a standard class from the start in favor of a new "Destiny" system. This allows the player to build their characters stats from the outset in any of the three disciplines - Might, Sorcery and Finesse. These choices will unlock Destiny cards that enhance their selected abilities. Each card is rewarded based on the type of build you choose allowing unique bonuses for specializing in a single discipline, creating a hybrid warrior or even choosing to possess skill in all three. The system is an attempt to allow stats and bonuses to be altered with a level of flexibility that most RPGs don't offer and to avoid the player being locked into a specific build. Reckoning also seeks to merge the deep RPG mechanics with the combat system of action games. It takes advantage of hybrid abilities and skills, allowing the merging of abilities and cross-class combos, and lets you carry up to two of nine weapon types, with Real-Time Weapon Change.

Has two DLC campaigns. The first, titled The Legend of Dead Kel, involves being shipwrecked on an island run by said dreaded pirate. The second, titled Teeth of Naros, involves coming to the aid of the Kollossae, a civilization based upon ancient Greece located in said region.

Reckoning itself is the brainchild of Big Huge, owned first by THQ and then 38 Studios, who were themselves developing an MMORPG called "Project Copernicus." Reckoning became a Dolled-Up Prequel to it.

Released in February 2012, Reckoning met a decent reception from critics, almost all of whom praised the game's ambitious design regardless of what they thought of the execution; it was described as a sort of Skyrim Lite, and it sold 1.2 million copies in its first three months. However, the game had gone so over-budget that it needed to sell three million copies just to break even. In late May 2012, 38 Studios dissolved in the midst of catastrophic financial shenanigans

and a barrage of accusations

The majority of Big Huge's staff went on to become a subsidiary of Epic Games, "Impossible Studios". They lived up to their name, producing nothing tangible in the six months they remained in existence, and the only game they developed, Infinity Blade: Dungeons, never saw the light of day. They have since reformed under their original name to release a Clash of Clans clone, "DomiNations," as a Mobile Phone Game published by Nexon. Schilling, who wagered (and lost) much of his baseball-playing fortune on the gamble, has remained philosophical about the whole thing. The Intellectual Property itself defaulted to the State of Rhode Island. It was put up for auction in an attempt to recoup some money, but no buyers were forthcoming for years.

On the 6th of September 2018, THQ Nordic announced they had acquired the Kingdoms of Amalur IP from Rhode Island, and in September 2020, their remaster was released, titled Kingdoms of Amalur: Re-Reckoning. A brand new expansion titled "Fatesworn" was made after release, which was released on the 14th of December 2021. Effectively a continuation of the main story, the expansion pits the Fateless One against Telogrus, the God of Chaos.