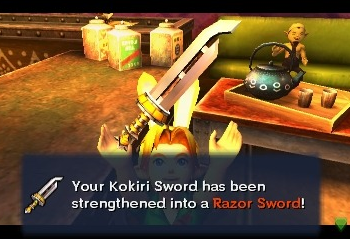 This is a gameplay trope where a weapon or other piece of equipment can be altered in order to conform to a higher standard, making it more useful to the player (or to put it more simply; upgraded). This might be done through a temporary Power-Up, a permanent Upgrade Artifact as a reward for a Side Quest, or through a specific "weapon upgrade" mechanic. The upgrade could be linear (e.g. "Weapon v1 is upgraded into Weapon v1.5") or branching (e.g. "Armour A can be upgraded to Armour Aa, Armour Ab or Armour Ac"), which might itself be spiced up with a Mutually Exclusive Powerup or two. The upgrades could be optional or required to progress (or a mixture of the two). Conversely, they could be automatic and used to reward the player as they progress.

In this context, "upgrade" only means an upgrade in terms of gameplay, not flavour or story. So, switching out different pieces of equipment, even if they're upgrades In-Universe, doesn't countnote Switching out parts on a piece of equipment would qualify, but belongs on one of the subtropes mentioned below (e.g. if the Player Character always uses the same sword, but can equip different accessories for it instead of different weapons). Conversely, something which wouldn't strictly be considered an upgrade in Real Life can still be treated as an upgrade by the game's mechanics (e.g. picking up a second pistol to "upgrade" a Little Useless Gun into Guns Akimbonote Apart from the rare occasions where the Dual Wielded pistols are treated as separate weapons to the single pistol, of course).

From the player's perspective, upgrading their equipment can be used to reward them or give them a sense of progression (especially if the game uses Equipment-Based Progression). It can also be used to make older gear with a specific purpose useful later in the game without giving the player a Disk One Nuke (e.g. infinite ammo for a weaker weapon so it can serve as an Emergency Weapon or a damage upgrade for an elemental weapon so it isn't outclassed by later ones, preventing Elemental Tiers). This is helpful when the Sorting Algorithm of Weapon Effectiveness is in effect, but enemies have specific weaknesses to different weapon types. It can also be used as part of a Double Unlock (first you have to quest for the Penultimate Weapon, then you have to quest to upgrade it into the Infinity -1 Sword).

Compare Item Crafting and Just Add Water (which involve creating equipment, although either or both of the two can overlap or co-exist if lesser equipment is used as an "ingredient"). Temporary upgrades overlap with Power-Up. If the equipments' models change, you can expect that Elaborate Equals Effective. For upgrading your character via equipment, see Equipment-Based Progression.

Examples (only list examples which don't belong on a subtrope's page)

By killing enough enemies with any weapon in ''Medal of Honor: Airborne'', you can have them upgraded to make them more useful. In this video, the pathetic Mauser C96 is gradually upgraded into a punch-packing automatic pistol.

By killing enough enemies with any weapon in ''Medal of Honor: Airborne'', you can have them upgraded to make them more useful. In this video, the pathetic Mauser C96 is gradually upgraded into a punch-packing automatic pistol.