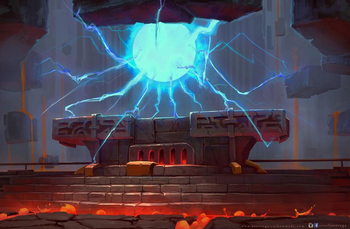 . Used with permission.
"Fan the flames, mold the metal; We are building an army."
— The Ancestor, Darkest Dungeon, when upgrading the forge
Advertisement:

The Ultimate Forge is the only place in the world where the Sword of Plot Advancement or Armor of Invincibility can be made. It's invariably very difficult to reach, atop the highest mountain or above a river of lava. Just what makes this forge so special may never quite be explained, but it's safe to say that either magic or Lost Technology is involved. The Ultimate Blacksmith might hang out here, but it's also common for the Ultimate Forge to be abandoned or guarded by monsters.

Most common in video games with Item Crafting systems. Other media are more likely to have an Ultimate Blacksmith, so the characters will have someone to talk to.