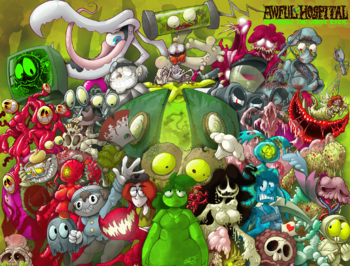 And you thought your healthcare provider was bad... note  Image

"You're here because you deserve to be here.
It is a hospital.
And you are a very sick individual."
— Jay's Journal
Advertisement:

An ordinary woman's infant son suddenly becomes hellishly sick, and his condition progressively worsens no matter what she or other doctors try. After her latest desperate attempt at saving her baby, the woman suddenly awakens in a strange transdimensional hospital of nightmarishly cartoonish design overseen by the dangerously inept and insufferably egotistical Dr. H.M. Phage, T.E., an anthropomorphic bowtie-collecting virus. With only the aid of countless invisible entities setting up camp in her mind and whispering to her various (often bizarre and/or nonsensical) instructions and directives, the woman must face insane alien doctors of dubious qualification and stability, sanity-shattering worlds and beings, and rude, talking body parts who spout terrible puns in her desperate search for her son's whereabouts. The woman's predicament becomes more complicated as she ends up uncovering the dark secrets revolving around the hospital's deteriorating condition and the origins of reality as we know it, and eventually learns of her son's ties to a multiverse-destroying force of evil.

The messed-up, fever dream-fueled brainchild of one Jonathan "Bogleech" Wojcik, (creator of Mortasheen and other bizarre media) Awful Hospital: Seriously the Worst Ever is an incredibly strange and astonishingly gross interactive science fiction Body Horror Comedy webcomic that first started on August 1st, 2014.

Awful Hospital is ongoing and updated occasionally. Similar to MS Paint Adventures and other Interactive Comics, the comic takes on a vertical panel format with descriptive text and dialogue from the characters appearing below. Readers can use the comment section below to make suggestions not just for what the main character does, but what she can say to other characters as well - this manifests In-Universe as many disconnected voices she's been hearing since she woke up in the Hospital.

It can be read from the start here,

or from this archive of the comic's existing pages.

Updates can be followed via Dr. Phage's twitter feed here