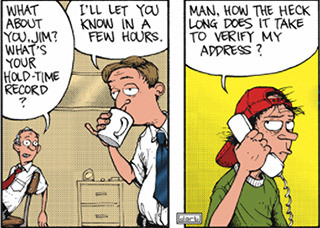 When calling a business, or any person who might receive a high volume of calls, one can expect to need to wait for an operator to become available. Sometimes, if there are few operators available, too many incoming calls, or both, a character can be left waiting for quite a while. These wait times may feel like hours in real life, but fictional wait times can take days to really drive the point home. During this time, a recording will almost always remind the caller that "Your call is important to us" and ask them to continue holding.

Sometimes, a character may be placed on hold by the person they have called. Usually they will leave the phone or forget about it entirely.