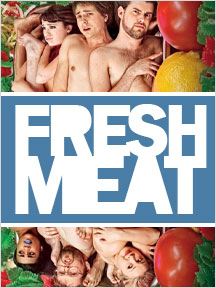 Fresh Meat is a British comedy series from the creators of Peep Show that aired on Channel 4 for four series between 2011 and 2016. The show centres around 6 students attending university in Manchester who miss out on accommodation in halls and so are forced to share a house together.

The main characters are: Kingsley, a Dogged Nice Guy with a crush on Josie, who isn't as innocent as she appears; Howard, a social recluse with only a slight grasp on normal human behaviour; Vod, Deadpan Snarker Lad-ette and self-proclaimed slut; Oregon, a pampered-yet-sweet-but-also-neurotic girl trying to escape her privileged upbringing; and JP - affluent but a bit of an idiot, who tries far too hard to impress those around him.