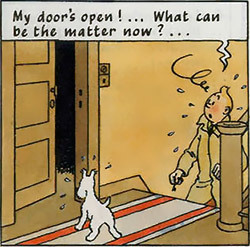 " Just once, I wish it was a surprise party behind one of these ominously open doors."
— David Sinclair, NUMB3RS, "Guilt Trip"
Advertisement:

Too bad whoever they find behind that door, be it a suspect, relative, or complete stranger, can't help them close the case.

This is a Death Trope so don't be surprised by spoilers behind the ominously open folders.