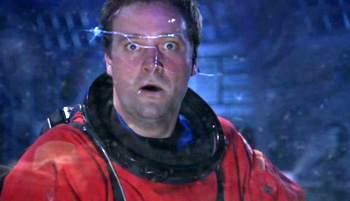 A character is in grave peril, perhaps running away from the Monster of the Week, or just happening to be in the wrong place at the wrong time when Phlebotinum Breakdown occurred.

They manage to take refuge in a vehicle or closed room of some sort, and breathe a sigh of relief...

...And that's when the Ominous Crack occurs. This indicates that the windshield or wall is about to give, cruelly destroying the character's false sense of security.

Cue a suspense-filled sequence as the cracks slowly spread through the glass and/or oh-crap-I'm-screwed line. A similar fate can occur when a character is standing on ice or some other ground that cannot support their weight. Compare Shatterpoint Tap.