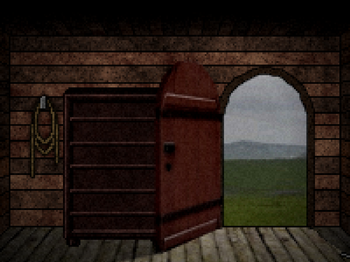 If every room escape game started out like this, the genre would be a lot easier.
"I woke up in a room. The room is not locked and I remember... everything.
I'm a werewolf. Tonight I will turn and people will die... Unless I find a way to prevent myself from leaving this place.
I must make sure that whatever happens, I DON'T ESCAPE."
— The opening quote to the first game.
Advertisement:

Don't Escape is a series of Point-and-Click Web Games by developer scriptwelder, creator of the Deep Sleep Trilogy.

The series takes the typical Room Escape Game premise and turns it on its head: rather than trying to escape from a mysterious room, in each game you must work to secure the room you start in, preventing yourself from getting out and anything else from getting in. The games are also unusual in that each one, aside from the first, operates on a time limit, with certain actions consuming in-game time, and you must complete your goal before it's too late.

, stays closest to the original room escape formula. You Wake Up in a Room, except in this case, you play as a werewolf who must barricade every possible exit out of the room before you turn into a werewolf and potentially kill innocent people.

takes place After the End, with your goal being to prevent a horde of zombies from breaking in. But you only have 8 hours to do so.

takes place on a spaceship where the entire crew is dead. You must find out what happened to the crew and prevent it from getting to you as well. The only issue is, life support has been disabled and there's only 1 hour of oxygen left…

A fourth game entitled Don't Escape: 4 Days to Survive (formerly Don't Escape: 4 Days in a Wasteland) was released on March 11th, 2019, and was the first commercial game in the series. A cataclysmic event has caused the moon to split in half, and you must make preparations to survive before some unknown terror gets you. It expands heavily on the gameplay of the first three, taking place over 4 days as opposed to one and featuring a new countdown and new obstacles on each day.

On Jul 29, 2019, Don't Escape Trilogy was released, taking the first three games in the series and bundling them together, complete with an auto-save feature for both the second and third games, as well as Steam achievements for all of them.