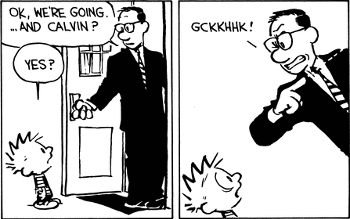 Just another day of being told the consequences for disobedience!
Otto: And once the vicious one realizes he has no further use for an old, blind troll...I— Well...[does the throat-slitting gesture]
Dictatious: ...well, what? You know I can't see.
Otto: Oh. I moves my thumb across my throat. It is, as we say, a killing motion.
— Trollhunters, "The Creepslayerz"
Advertisement:

A common, non-verbal way to threaten someone with death in fiction to slide your index finger against your throat to simulate a beheading or a Slashed Throat, sometimes with a vocalized "Kccch!" sound. Usually, the one being threatened will clutch his neck in fear.

Alternatively, this gesture is used to tell someone to "Shut up" or "Cut it out". In video broadcasts, it is used by those in front of the camera to tell the cameraman or programmers to cut away from the chaos going on before them.

A subtrope of Implied Death Threat. See also Slashed Throat and Off with His Head!.

All Iqbal gets from his openly disastrous press conference is a snarky reply from a reporter.

Example of:
Refuge in Audacity

All Iqbal gets from his openly disastrous press conference is a snarky reply from a reporter.