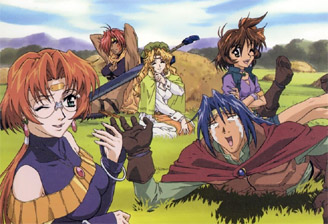 When an all-female adventuring team needs a mage, the only one they can get on short notice is the burly adopted son of the head of the local mage guild. Not only does Louie look more like a fighter than a mage, he acts like it, too, getting into all manner of trouble and trying to solve it with his fists. When Melissa, the team's cleric learns that her god has assigned to her a special relationship with Louie, she is most upset.

A slapstick comedy set in the world of the ultra-serious high fantasy drama Record of Lodoss War, Rune Soldier Louie (Mahou Senshi Riui) has fun playing against type with the tropes of the fantasy genre. Lodoss's roots in Dungeons & Dragons are just as clear here as they are in the original series, with the stereotypical character classes — who don't always act anything like you would expect they should.