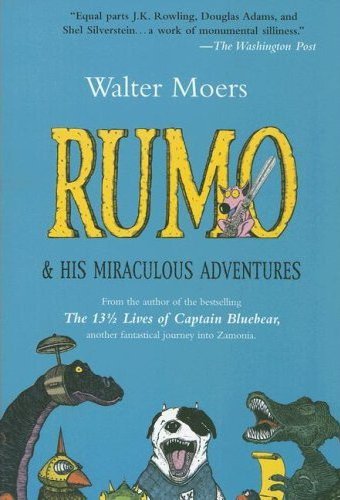 Rumo and his Miraculous Adventures (Rumo for short) is a book by Walter Moers set in Zamonia, the setting for The 13 ½ Lives of Captain Bluebear and The City of Dreaming Books. It revolves around Rumo, a wolperting (an intelligent, bipedal, horned dog), after he is kidnapped by cyclopean pirates. Following his escape from them, he sets off on a journey to find 'the silver thread' that will lead him to true love, but is waylaid repeatedly, most importantly when almost everyone he knows is kidnapped and taken to the hellish underground Netherworld, which he must rescue them from. Along the way he picks up several friends, including Dandelion and Krindle, the talking sword possessed by two very different spirits, Voltozan Smyke the shark grub, and Urs of the Snows, another wolperting and talented chef.