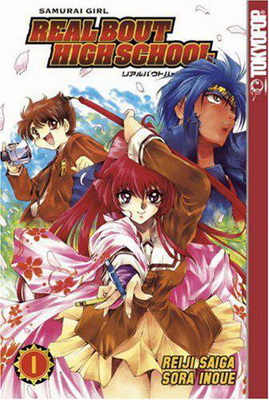 Real Bout High School (titled Samurai Girl: Real Bout High School for the anime) is a martial arts light novel written by Reiji Saiga and illustrated by Sora Inoue, serialized in Kadokawa's Dragon Magazine note  not to be confused with the American D&D magazine from 1997 to 2010, a manga version by the same duo ran in Gekkan Comic Dragon from 1998 to 2003 note  due to Comic Dragon's cancellation .
Advertisement:

The series recieved a 13-episode anime series by GONZO in 2001, and much like the studio's other adaptations, the anime diverges heavily from its source material.

Both the manga and anime were among the many titles licensed by Tokyopop during the company's heyday, with the anime having a dub produced by Bang Zoom! Entertainment.

The series centers around a high school where martial arts are part of the standard curriculum; one of its students, Samurai Girl Ryoko Mitsurugi, is the top fighter and most popular girl in school... until a challenger arrives in the form of the uncouth Shizuma Kusanagi, a transfer student from Kansai. While he lacks Ryoko's grace, he soon proves to be a powerful fighter, and may surpass Ryoko as the best fighter at Daimon High. Principal Takao Todo encourages rivalry between the competitors, setting up a dangerous "K-Fighting" tournament where even the teachers can join in and settle once-and-for-all just who is the top dog on campus.