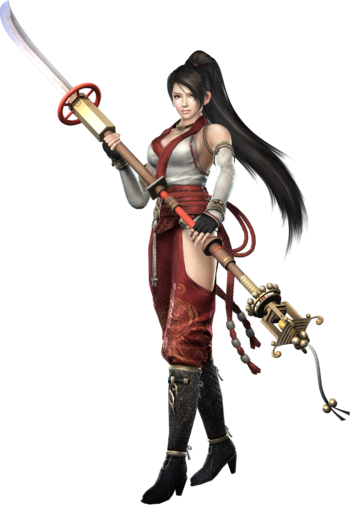 A naginata is a Japanese Blade on a Stick similar to a glaive, characterized by a long, curved blade with a handguard. In Japanese works especially, naginatas are a common weapon for a female close-range fighter. In works that don't stress the relatively subtle difference between weapons, it may be generalized to simply "spear" rather than a naginata.

In terms of fighting ability, a naginata is no more or less suitable a weapon for a woman than a katana. Both are weapons that favor skill and training over brute strength. So why is one more feminine than the other? Naginatas are battlefield weapons, while katanas are self defense weapons. It’s the difference between a pistol and a rifle — a katana is like a pistol: less effective, but you can carry it with you at all times. A naginata is like a rifle: you only bring it if you intend to use it. Since women in feudal Japan were expected to keep the home, it was not an issue for them to always have a naginata at hand. Add in the connotations of purity and fragility that fighting from farther away implies, and you end up with a very "feminine" weapon (that is still capable of disemboweling a person with one good swing). Can be considered a downplayed version of Guys Smash, Girls Shoot, in that the woman in question is still using a melee weapon, but one that maintains a reasonable distance and requires much less brutal, close-quarters combat fighting than a sword, axe, or mace would. The aforementioned length of the naginata also reduces the negative effect of a shorter woman's lower reach compared to a man.

This has its roots in Japanese history. Though naginatas were common weapons among the spearmen of commoner infantry divisions, they also found a place as a symbol of status for samurai's wives. A young noblewoman was trained in the naginata as a weapon to defend the home of her future husband, especially during the violent and treacherous Sengoku Period. Naginatas were often part of a samurai woman or onna-musha's dowry, and a girl skilled in the naginata was considered quite the attractive bride to potential suitorsnote More precisely, the weapon rose to prominence in the Genpei War and saw plenty of use in the hands of male warriors for years until the yari spear became more popular in the later Sengoku period, after which the naginata became relegated solely to the use of samurai's wives and gained its iconic image, particularly during the peaceful Edo period. Being a submissive wife but a stalwart defender of the home was considered the embodiment of the Yamato Nadeshiko ideal. This association with nobility and femininity is the reason the naginata is a common Weapon of Choice for a Lady of War.

Of course, there's some Values Dissonance with this not being a Discredited Trope due to its origins. It's like how Textile Work Is Feminine could just casually appear in one of the most famous recent films in Japan when it just reaches parody levels elsewhere.

Even to this day, atarashii naginata is a common after-school activity in Japan, though now young girls practice kendo and archery more often, compared to before.

Oftentimes the naginata-user is contrasted by a man (or boyish girl) who uses a more traditional weapon, highlighting the femininity inherent in this trope.