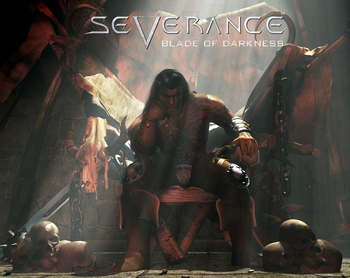 Severance: Blade of Darkness (known as Blade: Edge of Darkness in Europe) is a third person Hack and Slash developed by Spanish studio Rebel Act Studios and published by Codemasters. It was released on February 2001. Taking place place in a Dark Fantasy setting, armies of orcs and undead are invading the land, and it falls upon a hero to recover the Sword of Light and defeat the master of the hordes.
Advertisement:

The game was abandonware for several years due to Codemasters losing the distribution rights in 2014. In these issues were eventually resolved and an Updated Re-release arrived on Steam and GOG.com on October 2021.

The members of Rebel Act Studios who worked in this game would later on found the studio MercurySteam.