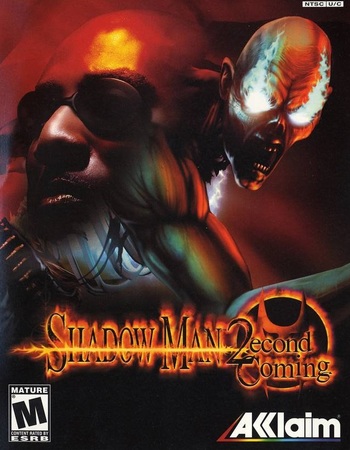 "I am the Lord of Deadside."
Advertisement:

Shadow Man is a two-part series of multi-platform action-adventure games, the first released in 1999 by Acclaim Entertainment for the PC and Nintendo 64 (later ported to the Sony PlayStation and Sega Dreamcast), and the sequel, Shadow Man 2econd Coming, released on the PlayStation 2 in 2002.

In both games, the player takes the role of Michael LeRoi, a member of a long line of "Shadow Men" — African voodoo warriors charged with protecting our world (Liveside) from the threats of the afterlife (Deadside).

In the first game, Mama Nettie, the powerful voodoo priestess who commands Michael, has a prophetic dream — a dream in which five serial killers, under the command of the evil Legion, bring about the Apocalypse on Liveside. Under Mama Nettie's instruction, Michael travels to Deadside to search for a way to stop Legion and his minions from initiating the Apocalypse — the End of All Things.

In the second game, Michael returns to Liveside after the fallout of Legion's defeat, only to find a new threat on the horizon — Asmodeus and his Grigori Sephiroth, looking to seize the opportunity to release Asmodeus from The Pit and bring about the Apocalypse as told in the Book of Revelation.

The Shadow Man video games were based on a comic book hero created in 1992 at Valiant Comics, a company later bought out by Acclaim.

In March 2020, Nightdive Studios announced Shadow Man Remastered for the PlayStation 4, Xbox One, Nintendo Switch and PC, involving updating the graphics and effects with modern sensibilities, as well as the reintegration of cut content. The PC version of Remastered was eventually released in April 2021. The console versions were released on January 13, 2022.

Not to be confused with gaming's other Shadow Man.