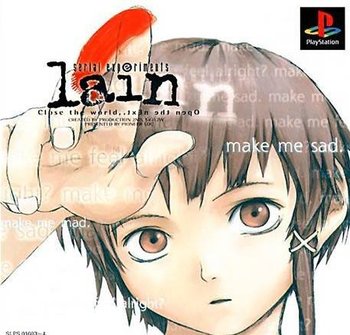 Serial Experiments Lain is a video game based off the anime of the same name. It was released on the Playstation in 1998.

The game might take place in an alternate reality from the series, features a cast of new characters, however it shares similar themes to the anime.

Serial Experiments Lain was developed concurrently with the anime, and was released shortly after its conclusion. Calling it a "game" may be a bit of a stretch, and the creators actually define it as "psychostretchware". Instead of actual gameplay, it acts more as an interface to access parts of Lain's story, presenting a multimedia experience that includes video, diary excerpts, and notes from Lain's therapist.

Although it never received an official English translation, a group of fans released a complete translated script for the game in 2014, which can be downloaded here

. Additionally, a fully-functioning web browser port with multi-language support was published in 2021, and can be played here