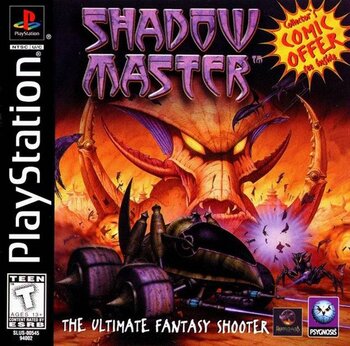 "For a thousand years, the war had raged. Out on the rim of the galaxy, and in the dark vastness beyond, two mighty alien civilizations locked in eternal conflict..."

Shadow Master is a Mecha Game made by HammerHead studios and Psygnosis for the PlayStation.

Set in a distant galaxy, a power vacuum formed in the aftermath of a galactic war leads to an intergalactic overlord, who calls himself the "Shadow Master", to have his army enslave multiple surrounding planets. With the Shadow Master and his army conquering entire worlds, it's up to you, an elite pilot behind the wheels of a weaponized ATV built with alien technology to travel across multiple worlds and wipe out the Shadow Master's armies.

The game is played from a first-person view, through the displays of your mecha, with an onscreen crosshair pointing out where your shots will hit. A smaller, separate indicator appears on the right side, displaying wire-frame models and extensive HUD information depicting the enemy (ies) you're currently shooting at. Unlike other FPS-style games, Shadow Master is surprisingly straightforward and direct - you just keep moving ahead and destroy everything, though the game does allow you to backtrack at times.

And out last hope of salvation, stood against the darkness, alone...

"And so the Shadow Master was destroyed, his empire smashed and in ruins."
"Worlds once enslaced, would now be liberated, Their peoples could again live in peace, free of the oppressor's fist."
"But first, the long journey home to a hero's welcome."