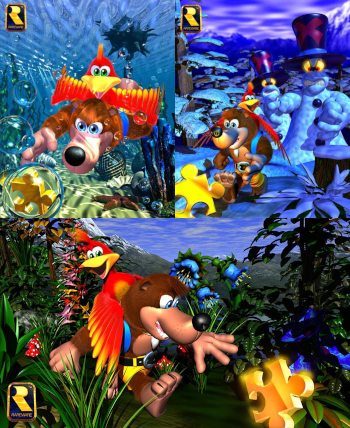 In the late 90's, 3D polygons were ready to take over the gaming industry. A good chunk of the market at the time consisted of 2D Platform Games, so developers had the job of figuring out a way for those obstacle courses to properly transition into a 3D space. The answer was to seemingly downplay the "obstacle course" part.

Enter the Collect-A-Thon (short for "Collection Marathon"). A style of Platform Game that was very popular in that era, inspired by the advent of Super Mario 64, which sought to take advantage of the new axis provided by 3D polygons through large, explorable worlds where players could move around freely. This, however, led to some new problems: traditional Level Goals at the end of linear paths looked a bit pointless in this new open-world reality. 3D perspective also made it harder for players to gauge height and distance during jumping sections, which wasn't helped by the camera now being dynamic instead of fixed (player breaks for camera adjusting were frequent back then). The solution was to sideline the actual platforming and turn exploration into a major part of the experience, but that also meant having to incentivize the player with some sort reward that could also function as a goal in order to do so; that's were the collection aspect comes in.

The core formula is as follows: collect X number of Y things to advance further into the game. There are barriers, natural or not, that will prevent the player from just moving on to the next level unless they explore and collect enough of the resident Plot Coupons; however, very rarely are those conditions unfair (especially in the early game) and having to gather every collectible possible is never necessary in case you just want to beat the Final Boss and finish the game, Golden Ending aside.

Collect-A-Thons are known to fill their worlds with trinkets of various types, each in their own tiers of importance. Primary collectibles are rare and the most important to get, always requiring one or more objectives of relatively moderate-to-hard difficulty to be completed before awarded (they're often shiny and/or gold, to highlight their importance). Secondary and tertiary collectibles, on the other hand, are plentiful and serve to directly or indirectly help the player obtain primary ones, either by outright granting said primary collectibles after enough of them are picked up, guiding the player towards points of interest or being used as "currency" for new moves and weapons that will be necessary in the long run. There are also "bonus" collectibles that are generally optional to a non-100% Completion run, meaning they can be either easier or harder to collect depending on how useful the reward provided is.

The genre would eventually lose popularity somewhere in the mid 00's as games like Grand Theft Auto III would expand further on the open-world concept, thus making Collect-A-Thons redundant for the most part. That said, the notion of exploring worlds in order to find and collect things was not lost in many modern games. In fact, it still persists even two decades later. 3D Platformers, however, would fall to the wayside by the late 00's just as 2D ones returned to viability in the market thanks to the success of New Super Mario Bros. and other games of the type that thrived on handhelds and even consoles. The term "Collect-A-Thon" itself is relatively recent (back in the 90's, those were just good old Platform Games, except in 3D) and sorta carries a derisive tone to it, but there are many who still utilize it unironically, especially for more modern takes of the genre.

Reminder that not every 3D Platformer is a Collect-A-Thon (following the modern, agreed-upon definition). They might borrow some elements that are part of the genre, like the Crash Bandicoot games that require collected crystals to progress, but unless they feature enough explorable areas and gated progression under a specific number of objects, they don't count. Similarly, 2D Collect-A-Thons do exist as well, in which case expect several branching paths and side-areas featuring important collectibles.

Compare Metroidvania, which also encourages exploration and employs gated progression, but is usually not divided in individual stages, instead featuring an interconnected world.