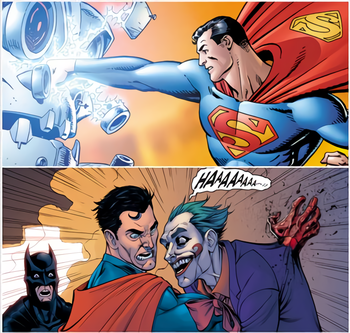 Huh, what a difference a few decades make.
"How much blood will you shed to stay alive?"
— A tagline for Saw as seen here

A type of Tone Shift and the violent twin of Darker and Edgier. It's a work that is made more graphically violent than it used to be, or than its source material is. Heck, a lot of poorly-done attempts at being Darker and Edgier end up becoming this instead.

In the United States, when the Hays Office disbanded in favor of the MPAA rating system, along with everything else, films got bloodier. One aspect of this was remakes of horror films. This trope often involves the presence of Made of Plasticine and Ludicrous Gibs that were absent in the original. It's often achieved by simply averting the Inverse Law of Sharpness and Accuracy, or turning the Badbutt or Badass Pacifist into a full-fledged badass.

In horror sequels, this is the typical form of Sequel Escalation. Expect the producers to end up Overdrawn at the Blood Bank. In cases of comedies, this is an aspect of Crosses the Line Twice and Black Comedy. Expect to see a lot of High-Pressure Blood.

A Sister Trope to Darker and Edgier, Hotter and Sexier and Younger and Hipper.

Compare Gorn & Made of Plasticine (both of which this trope almost always involves), Grimmification, Obligatory Swearing and Denser and Wackier. Contrast Lighter and Softer, Bowdlerize and Disneyfication.