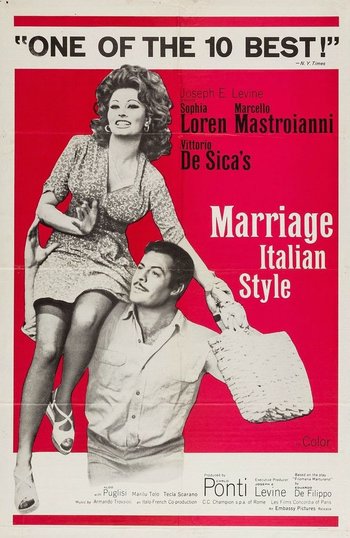 Domenico (Mastroianni) is a wealthy, 50-year-old Naples businessman, engaged to be married to a shopgirl in one of his stores, who's less than half his age. Domenico is right in the middle of making wedding plans when he receives word that Filomena (Loren), his mistress/Girl Friday of 22 years, is on her deathbed. He rushes to her side and, before Domenico even knows what is happening, they are married.

Believing that he has fulfilled his mistress's Dying Wish, Domenico is pretty pissed off when he finds out that Filomena wasn't sick at all and the whole business was a just trick to get him to marry her. Filomena for her part is unapologetic, believing marriage is her due as his longtime companion. While all these complications play out, Domenico and Filomena's two-decade relationship unspools in a series of flashbacks.

One of thirteen films co-starring Loren and Mastroianni, and one of sixteen films where Loren either costarred with or was directed by De Sica.