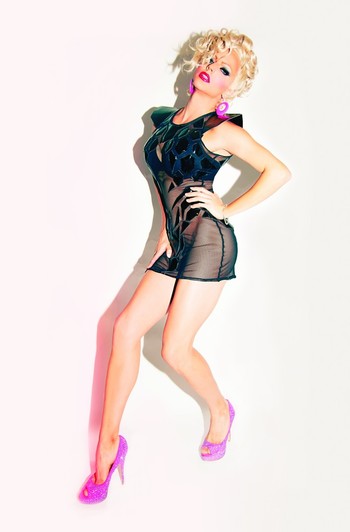 Relying on that body-ody-ody.
Advertisement:

Prior to competing on RuPaul's Drag Race, she appeared on a contestant (in drag) on the first season of Australian Idol, where she placed thirteenth. Following her turn on the show, she became the third Australian Idol contestant —following Guy Sebastian and Shannon Noll— to release a single ("Rub Me Wrong"), which peaked at #29 on the ARIA Singles Chart. Since then, she's performed all over the world in her drag persona, becoming one of the more recognizable faces of the medium.

In 2014, she competed on season six of RuPaul's Drag Race, where she finished as co-runner up with fellow Idol franchise alumnus Adore Delano. In 2018, she entered the UK Celebrity Big Brother house, ultimately emerging as that season's winner. As a result of her newfound popularity in the UK, she was then tapped to host E!'s The Bi Life, a bisexual reality dating show.

Alongside drag, she's a prolific recording artist, and released her first EP, Kaleidoscope, in 2015. She also performs frequently with Drag Race sisters Willam and Alaska Thunderfuck.

In 2019, Courtney competed in Australia's first-ever national selection for the Eurovision Song Contest in Tel Aviv, with the song "Fight for Love", ultimately finishing fourth to winner Kate Miller-Heidke.

, alongside fellow music artist Chelcee Grimes, in which they interview guests to find what that guest would bring to a queer utopia (and what they think could be improved in the real world).