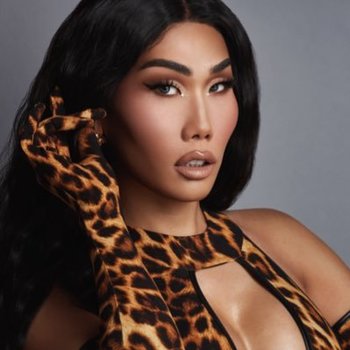 "I don't jump guns. I am the boom boom gun, honey."
Advertisement:

At the age of five years old, Gia began training in the art of performing traditional Japanese dance and kabuki; a talent she showed off during RuPaul's Drag Race: All Stars. She has also won various drag pageants including Miss Roscoe's 2013 and Miss Diosa 2013.

In 2014, Gia was cast in the sixth season of RuPaul's Drag Race, where she gained a following for her catchphrases, her voguing and her shady sense of humour. She was eliminated in tenth place after her "Snatch Game" performance as Kim Kardashian failed to impress the judges.

In 2016, Gia began taking hormones and came out publicly in 2017 as a transgender woman. She has been outspoken about her views towards Ru Paul for his views on allowing transgender and bio-queens to compete on RuPaul's Drag Race and his views on transgender issues in general.

Gia was announced as a contender on The Switch Drag Race; the Chilean version of RuPaul's Drag Race. She earned a total of ten challenge wins but ultimately placed runner up.

In 2018, Gia was cast in the fourth season of RuPaul's Drag Race: All Stars and is only the third transgender queen who has come out before the competition to appear on the show (the other two being Monica Beverly Hillz and Peppermint). Gia was eliminated in the third episode, again for a poor "Snatch Game" performance.

Gia has her own YouTube channel where she regularly posts. She released a series in 2018 entitled, 30 Days in Transition, which documented her life as a transgender woman and the different aspects of transitioning. She also frequently appears on WOW Presents' channel with other RuPaul's Drag Race alumni.

Gia Gunn provides examples of the below tropes: