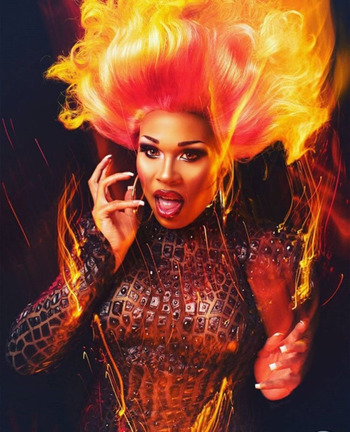 One of New York City's most prominent local drag queens, Peppermint is perhaps best known for competing on the ninth season of RuPaul's Drag Race, where she finished as the runner-up to winner Sasha Velour.

While many other transgender people compete on Drag Race, Peppermint is notable for being the first transgender woman on Drag Race to mention her gender identity on the show's official channels prior to the season airing (in her Meet The Queens video).note Several other Drag Race queens prior to her casting were also transgender, but either transitioned after their season wrapped or in one case coming out while on set.

Outside of drag, Peppermint is also actress and singer. She's guest-starred in many a television series (including an episode of America's Next Top Model as none other than Tyra Banks herself) and released her debut album, Hardcore Glamour, in 2009.

During her season of Drag Race, she collaborated with fellow season nine queens Aja, Sasha Velour, and Alexis Michelle on the single "C.L.A.T." note "Club, Legend, Art, Theatre", which celebrates their shared hometown. She's also released singles parodying the likes of Azealia Banks and Beyoncé. She also has a documentary about her life in production with the working title, Project Peppermint.

In 2018, Peppermint joined the cast of Head Over Heels, a jukebox musical based on the music of the The Go-Go's, becoming the first trans woman to originate a principal role in a Broadway production.