Anime / Lu Over the Wall 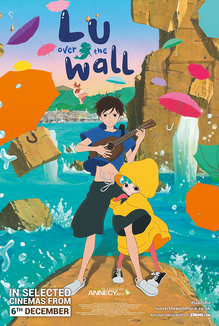 Lu Over the Wall (Yoake Tsugeru Lu no Uta) is a 2017 anime fantasy film directed by Masaaki Yuasa and produced by Science SARU. It tells the story of Ordinary Middle School Student Kai Ashimoto and his encounter with a mermaid, the titular Lu.

Kai lives in Hinashi Town, a lonely fishing village, with his father and his grandfather, a parasol maker. He used to live in Tokyo, but after his parents divorced he moved back to his parent's home town. Kai has trouble telling his parents the complicated feelings he has for them, and he's lonely and pessimistic about his school life. One of his only joys is uploading songs he writes to the internet.

One day, his classmates Kunio and Yuho invite him to join their band, "SEIRÈN". As he reluctantly follows them to Mermaid Island, their practice spot which the rest of the townsfolk avoid, they meet Lu, a mermaid girl. Lu is attracted to their music and soon develops a close bond with Kai. As Kai begins to spend time with her, he starts to be able to say what it is that he's really thinking. Though of course, nothing is ever that simple. Especially when you live in a town that considers mermaids a curse.

The film opened to positive reception from critics and audiences and won the Ōfuji Noburō Award and the Annecy International Cristal award for best feature film.

For a similar premise involving a boy meeting a fish-girl, see Ponyo on the Cliff by the Sea.

Lu Over the Wall provides examples of the following tropes: