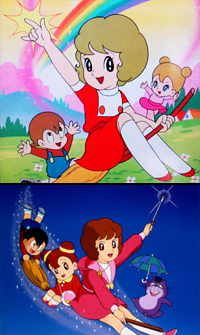 Sally the Witch (or Mahoutsukai Sally) is one of the first Magical Girl manga and anime, specifically it's the second to be published, but the first to be animated. note  While the original manga for Himitsu no Akko-chan made its debut in Ribon in 1962, Sally was animated first and Akko-chan took Sally's timeslot after Sally ended

The manga was written and illustrated by Mitsuteru Yokoyama (of Gigantor and Giant Robo fame), and is said to have been influenced by the American sitcom Bewitched. It was published by Shueisha in Ribon magazine, running from 1966 to 1967 and culminating in a single volume.

The work was adapted to an anime, which was directed by Toshio Katsuta and animated by Toei Animation for air on NET (later TV Asahi). Originally running from 1966 to 1968, the series included 109 episodes. A sequel to the original anime, titled "Sally the Witch 2", was produced later by Toei under director Osamu Kasai. It ran on TV Asahi between 1989 and 1991, with 88 episodes. An animated film for the series was also created by Toei in 1990 during the run of "Sally the Witch 2".

The series follows Sally, princess of the Land of Magic (later given the name Astoria (no, not that one) in the 80s/90s series). One day, after becoming increasingly bored due to her parents never being around and always making her study, she decides to run away to the Human World (Earth). There she meets two schoolgirls, named Yoshiko ("Yotchan") and Sumire (Tomboy and Girly Girl respectively), who quickly become friends with her after she, alongside Cub (who was initially sent by her Father, the King of the Land of Magic, to come bring her back home) helps them during an incident regarding two store robbers. Sally then decides to stay & live in the Human World, with Cub staying with her, now disguising himself to other humans as Sally’s brother, in order to avoid the King’s wrath. The series consists mostly of the episodic misadventures of Sally and friends as she faces the world and the plethora of problems it has in store for her (with a bit of help from her magic). All the while keeping her magic & her identity as a magical princess a secret from even her closest friends.

The first 17 episodes of the original anime were created in black and white. After this, the series transitioned to colour, making "Sally the Witch" one of the first full-colour animes. Some foreign releases of the '60s series (i.e., Italy) omitted the monochrome episodes. No incarnation of the anime or manga has received an English release outside of a few fansubbed episodes, although the '60s anime is well remembered by many Francophone Canadians, who watched it dubbed in 1969 on Radio-Canada (and in cable reruns for decades afterward) as Minifée.