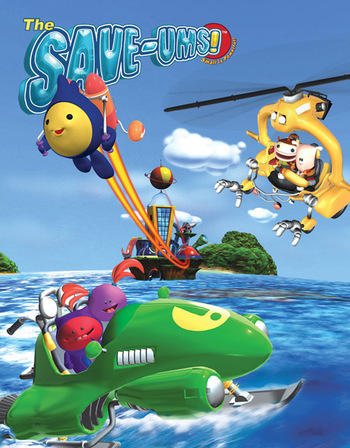 The Save-Ums! is a Canadian All-CGI Cartoon for preschoolers that was created by Dan Clark and produced by Decode Entertainment (now part of WildBrain) and C.O.R.E. Digital Pictures for CBC Kids. It ran from February 24, 2003, to July 11, 2006 for a total of 2 seasons and 39 episodes. It also aired on Discovery Kids in the United States.

The show stars the titular Save-Ums, who are a group of alien children made up of Jazzi, Noodle, Custard, Ka-Chung, Foo, and B.B. Jammies. Every episode, these six little aliens head out on various kinds of rescue missions or problem-solving expeditions to help the various denizens (usually small animals) of the world they live in, which is a great ocean full of all kinds of unique islands.

"The call is coming from Trope World!"

Fun to have, and fun to give. Until you get wet.

Example of:
Baths Are Fun

Fun to have, and fun to give. Until you get wet.