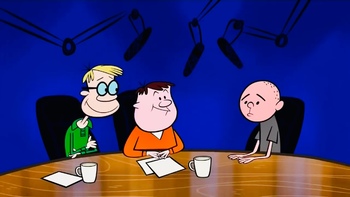 From left to right: Stephen, Ricky and Karl, as animated in the HBO Animated Adaptation.
"Oh, this is ABSOLUTE BOLLOCKS!"
— Ricky Gervais basically describing the entire show.
"You'd never put yourself, say, in a position again where you have two people trying to wind you up for the sake of fun and laughter for the public on a tinpot radio station between one and three every Saturday."
— Ricky Gervais describing the XFM era of the show
Advertisement:

The Ricky Gervais Show is an online radio show starring comedians Ricky Gervais and Stephen Merchant (of The Office (UK) and Extras fame) and producer Karl Pilkington. The show started as a weekly radio show on UK digital music station XFM, but has gone online since 2005. For a number of years, it held the Guinness record for most downloaded podcast. HBO aired three seasons of an Animated Adaptation of the podcast, animated In the Style of Hanna-Barbera cartoons, running from 2010 to 2012.

The show basically has the format of a Seinfeldian Conversation: Ricky, Stephen and Karl talk about life in general, the news, amusing anecdotes and sometimes even a little life philosophy. The show started with just Ricky and Stephen, but eventually, Karl was included into the show, since Ricky and Stephen realized from talking to him that Karl's bizarre worldview was a source of humor they just had to exploit. Recently, they produced a series called "The Ricky Gervais Guide to..." and focused on topics like Medicine, England, Society, the Future, and the Human Body, though the discussions rarely remained that focused.

Example of:
When She Smiles