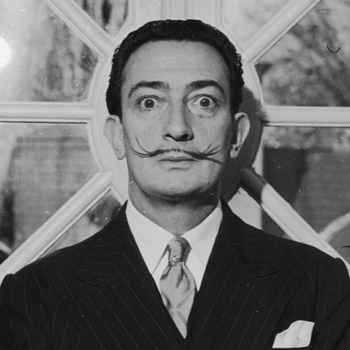 Salvador Domingo Felipe Jacinto Dalí i Domènech, 1st Marqués de Dalí de Pubol (11 May 1904 – 23 January 1989), better known as Salvador Dalí or "the guy with crazy mustaches who painted melting clocks and elephants with giant thin legs", was a Spanish man who worked in many fields but is most renowned for his surreal paintings.

Dalí was born, in Figueres, Spain. His father, Salvador Dalí y Cusi, was a middle-class lawyer and notary. Dalí's father had a strict disciplinary approach to raising children — a style of child-rearing which contrasted sharply with that of his mother, Felipa Domenech Ferres. She often indulged young Dalí in his art and early eccentricities.

It has been said that young Dalí was a precocious and intelligent child, prone to fits of anger against his parents and schoolmates. Consequently, Dalí was subjected to furious acts of cruelty by more dominant students or his father. The elder Dalí wouldn't tolerate his son's outbursts or eccentricities and punished him severely. Their relationship deteriorated when Dalí was still young, exacerbated by competition between he and his father for Felipa's affection.

Dalí had an older brother, born nine months before him, also named Salvador, who died of gastroenteritis. Later in his life, Dalí often related the story that when he was 5 years old, his parents took him to the grave of his older brother and told him he was his brother's reincarnation. In the metaphysical prose he frequently used, Dalí recalled, "[we] resembled each other like two drops of water, but we had different reflections." He "was probably a first version of myself, but conceived too much in the absolute."

Dalí, along with his younger sister Ana Maria and his parents, often spent time at their summer home in the coastal village of Cadaques. At an early age, Dalí was producing highly sophisticated drawings, and both of his parents strongly supported his artistic talent. It was here that his parents built him an art studio before he entered art school.

He is seen as one of the most important artists of the 20th century and is easily one of the most influential figures in the genre of surrealism, which involves painting dreamlike images which are left to the viewer to interpret as they wish.

He didn't just paint surrealism, though. He lived it. He became almost as well known for his bizarre behavior as his paintings, and may be largely responsible for the belief that artistic genius comes with insanity (see the page quote for his thoughts on the matter).

"The Persistence of Tropes":