Manga / The Kawai Complex Guide to Manors and Hostel Behavior 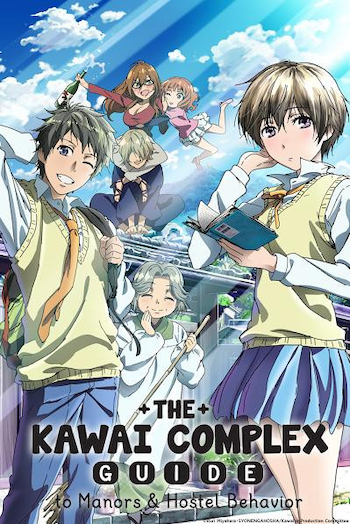 The Kawai Complex Guide to Manors and Hostel Behavior (Bokura wa Minna Kawaisou; literally means "We Are All From Kawai-Sō," but in Japanese it also sounds like "We Are All Pitiful") is a manga by Miyahara Ruri that was serialized in Young King Ours from June 2010 to December 2018 issues, with 90 chapters compiled into 11 volumes.

Usa, a high-school student who is excited to begin his new bachelor lifestyle thanks to his parent's job transfer, moves into a new apartment only to discover that not only does he have to share a room, but his roommate is a masochistic pervert. Just as he's about to leave, though, he finds out that his beautiful sempai Kawai Ritsu lives there, too... So begins Usa's life at Kawai House, where none of the people are as bad as they seem (usually they're worse), and his attempt to reach out to the quiet, antisocial, and bookish girl he longs to be closer to.

An anime television series adaptation by Brain's Base aired in the Spring 2014 Anime season. Crunchyroll is streaming the anime, and can be watched here

for viewers living in the US.

Shortly after the manga wrapped up, a mini series was announced for it.