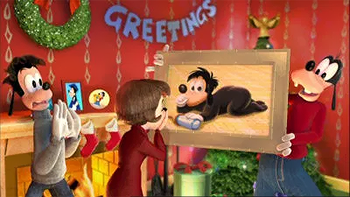 An old photo album is opened up, and you're enjoying some reminders of your past...

Until "it" shows up. You didn't realize it at the time, but that picture makes you want to crawl under a rock. Worse, everyone else loves it, having plenty of laughs. Fortunately, this rarely has any lasting effects aside from everyone having a chuckle at your expense. If you're lucky, you are the only one with such a picture. This can apply to home videos and slideshows as well.

Can be used to show that I Was Quite a Fashion Victim.

For some reason, "Embarrassing baby pictures" often consist of the subject lying naked, butt-up on a fur rug.

Definitely Truth in Television: Amazingly Embarrassing Parents (some of whom have only reached Amazingly Embarrassing status because their kids are easily-embarrassed) will rush to show their kids' friends these. It's a blessing in disguise to catch Mom showing these pictures to one's boyfriend, girlfriend, or significant other; it's Mom's stamp of approval of him or her. A rarer variant would be the child finding old photos of their parents, and they would be the one having plenty of laughs instead.