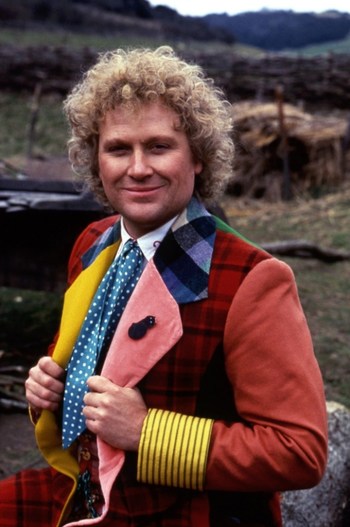 Colin Baker doing his peerless impersonation of a traffic light.
"I'm an actor. If you had said to me before I started acting that I'd get two bites of the cherry - you would do things that people will remember forever like 'The Brothers' which I did in the '70s and now 'Doctor Who' - I'd have been overjoyed and I still am."
Advertisement:

Colin Baker (born 8 June 1943 in London, England) is a British actor best known for his role as the sixth incarnation of the Doctor from Doctor Who. (No, he's not related to Tom Baker.) Known as a tremendously Nice Guy, Baker is also One of Us to an almost ridiculous degree — and, so far, the only TV Doctor who got his own Doctor Who fiction published in official Who media, several times over. He wrote (and performed) the short story "The Wings of a Butterfly" for Big Finish Doctor Who, several stories about his Doctor in his book Gallimaufry, and "The Age of Chaos", a graphic novel published by Marvel UK.

His main claim to fame before playing the Doctor was as the villainous proto-yuppie Paul Merroney in The Brothers, a 1970s British Soap Opera about a family-owned trucking company, which gave him a certain sex symbol status. He also made himself known to SF fans with a Large Ham performance as Bayban the Butcher, the deranged Villain of the Week in the Blake's 7 episode "City at the Edge of the World". On top of that, he was also the only Doctor (until Peter Capaldinote And David Tennant, counting Big Finish) to appear as a different character in the series first, as Commander Maxil in Season 20's "Arc Of Infinity".

Baker's time as the Doctor was fraught with Executive Meddling, a badly-timed first episode full of violence which was misinterpreted as an Establishing Character Moment, and the infamous technicolour nightmare coat. The show's myriad problems (among them a dwindling budget and dodgy scripts) were pinned on a single, eye-searing target: Baker. The show was placed in a sixteen-month limbo. After producing an impossibly cheesy

Protest Song to help "Save the Doctor," and a lot of angry protests at Michael Grade, the head exec of BBC at the time, the series was brought back, but still on loose terms.

After a lengthy Story Arc in which the Doctor (and, metaphorically, the show) was "put on trial", Colin Baker's tenure ended just as it began: shakily. He was unceremoniously fired, despite having played no part in the show's problems. Though Baker was offered to briefly return for a regeneration story he turned it down (as he was offered one episode rather than a full serialnote Baker turned this down as due to the way casting schedules worked, he realized he'd be nearly unemployable for a year until casting directors caught up with the news he wasn't The Doctor anymore if he did just one episode) and as a result, the Sixth Doctor's final moment was written as a Death by Falling Over and Sylvester McCoy (the Seventh Doctor) was forced to dress in his predecessor's costume with a rather unconvincing blond wig while face down on the floor of the TARDIS. Baker nowadays jokingly insists that since he never regenerated, he's technically still the Doctor and everyone who follows him are pretenders to the title. Since he also likes to joke that he wanted the role so bad he shot Peter Davison for it, it's clear that he really loves Doctor Who. Various Doctor Who Expanded Universe titles attempted to re-write the scene and give him a more dignified end — in 2015, the Big Finish Doctor Who box set "The Last Adventure" finally gave Baker the chance to perform it himself. It reunited him with many of the castmembers he'd shared the screen and the airwaves with to do so, and he finally got to hand the role over to Sylvester McCoy personally.

Doctor Who was put on hiatus twice during Baker's tenure, thanks to the backroom wrangling going on. Following the (first) cancellation, Baker played essentially the same role again in BBV Productions' Spiritual Successor The Stranger, again opposite Nicola Bryant (who played companion Peri — er, "Miss Brown"). The two teamed up once more in The Airzone Solution, also by Nicholas Briggs, alongside fellow Doctors Jon Pertwee, Peter Davison, and Sylvester McCoy.

, and looks upon "Old Sixie", as he calls his Doctor, with fondness. He currently still plays the character in Big Finish Doctor Who. Fans consider it a majorly redeeming venture for Colin's shaky time on-screen.

Appeared in 2012's I'm a Celebrity... Get Me Out of Here!. In July and August 2018 he appeared on television in the light hearted celebrity reality show Celebrity 5 Go Caravanning alongside fellow celebrities Tony Blackburn, Todd Carty (replaced by Brian Capron in the third episode), Sherrie Hewson and Sonia as they toured some of the UK's most spectacular countryside in two towed caravans.