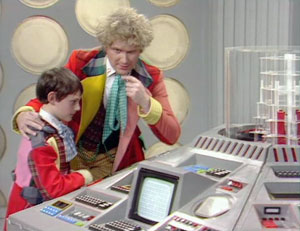 "Finally, someone else with fine dress sense! Our coats: are they not awesome?"
Dear Jim,
I like Dr. Who very much because I have got Colin Baker's Doctor Who suit made by my Nan and a tent TARDIS. Please could I see Colin Baker and go inside the TARDIS.
Yours sincerely Gareth Jenkins (Age 8)
Advertisement:

The banned one. Until it received a George Lucas Altered Version omitting the material that got it banned 37 years later.

For the uninitiated, there was a show in Britain where children essentially wrote in to popular BBC presenter Jimmy Savile (inventor of the throwback station and, after his death, revealed to be one of the most prolific known sexual predators in human history) to have their wishes fulfilled, no matter what they were. A set of children were chosen each week to somehow have this come true, and the result was known as Jim'll Fix It. One such child sent in the above letter.

Ladies and gentlemen, "A Fix with Sontarans", written by Eric Saward.

The story begins with the Sixth Doctor bumbling around the TARDIS, desperately fiddling with the center console while he mumbles things. With a flash, former companion Tegan Jovanka (having left the Doctor earlier) is somehow now on the TARDIS. Throwing aside most problems with the Doctor having regenerated again (handy, as Tegan saw this happen before), the Doctor quickly announces that Sontarans have invaded his TARDIS somehow and are going to blow it up with a bomb. (This special was broadcast during The Two Doctors' transmission period, which explains why the Sontarans also appear here.) And that he needs help, but didn't mean for her to show up. While arguing with Tegan some more, the Doctor accidentally smacks the same controls again and summons the mighty, the powerful...

...approximately 8-year-old Gareth Jenkins, dressed in a smaller version of the 6th Doctor's outfit. Gareth quickly agrees to help set a trap for the Sontarans, and Tegan is asked to help out by... getting Gareth a box to stand on. The Doctor and Gareth then press a lot of buttons, mostly consisting of the Doctor saying lines and Gareth repeating them exactly back as he does the action. Within seconds, the Sontarans storm the control room of the TARDIS... and are shocked to hear that this child is the Gareth Jenkins.

Yes, apparently, Gareth Jenkins will foil a Sontaran plot to take over the Earth in the distant future of 2001, and they decide to kill him now to change that. Of course they don't, as Gareth springs the trap— a steam jet that makes the Sontarans puke green blood and melt horrifically.

Host Jimmy Savile then shows up and gives Gareth an award while smashing the fourth wall into bits.

...well, that last sentence was what happened back during the mini-episode's original broadcast in 1985. The mini-episode was formerly included as a special feature on the DVD release of "The Two Doctors". However, at some point circa 2014, it was quietly removed from subsequent Region 2 copies

and other DVD prints onwards in response to the issues with Savile being brought to light.

A George Lucas Altered Version of the mini-episode was released on the Season 22 Blu-Ray box set in 2022, replacing the ending scene featuring Savile with a new ending divorcing it from Jim'll Fix It entirely and keeping the fourth wall intact:

Yes, apparently, Gareth Jenkins will foil a Sontaran plot to take over the Earth in the distant future of 2001, and they decide to kill him now to change that. Of course they don't, as Gareth springs the trap— a steam jet that makes the Sontarans puke green blood and melt horrifically.

A Sontaran fleet then shows up outside the TARDIS in retaliation. The Doctor muses that this battle is only the beginning...

This mini-episode provides examples of: