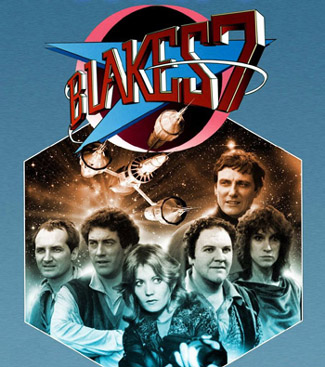 Left to right: Vila, Blake, Jenna, Gan, Avon, Cally. In the background, Liberator.
Vila: Where are all the good guys?
Blake: You could be looking at them.
Avon: What a very depressing thought.
Advertisement:

Blake's 7 is an iconic British SF series created by Terry Nation, who had earlier created the Daleks and the After the End drama series Survivors. It ran on BBC1 for four thirteen-episode series between 1978 and 1981.

The series, which takes place during the "third century of the new calendar" note  fans estimate this as approximately 2700 AD , is about the quest of a group of rebels to overthrow the evil and fascistic Federation that controls Earth and most of the known Galaxy. Though it is sometimes referred to as a Space Opera, it tended to the cynical end of the Sliding Scale of Idealism Versus Cynicism, particularly after a certain point. The format had elements of Wagon Train to the Stars. It was also lower-budget and looked it.

It is distinctive in that most of its leading characters are of the Anti-Hero type rather than your usual clean-cut heroes. In fact, Avon, the lead of the latter two seasons, counted as an Anti-Villain. It is often seen as Nation's attempt to subvert Star Trek — the B7 Federation's logo is the Trek Federation's logo rotated through 90 degrees — and other subversions of what, at the time, were standard Space Opera tropes are common.

Roj Blake (or just "Blake"— in The 'Verse, people typically used only a single name) had led a rebellion against the Federation which had been put down. Brainwashed, Blake had renounced the rebellion he led and was leading the life of a normal citizen until he was brought out of his brainwashing by a new group of rebels. Again, that putative rebellion was quashed and Blake was framed for crimes he didn't commit (child molestation, though this wasn't mentioned again after the second episode) and sent to a prison planet.

En route to exile, Blake and a group of prisoners managed to escape from captivity and take control of a mysterious and very advanced alien spaceship which they called the Liberator and resolved to fight back against the Federation. The series then chronicled their attempts, which were usually unsuccessful, to overthrow the Federation.

Blake was perhaps the only "good" character amongst the Seven but, though he sometimes appeared to be The Captain, he never had the full authority and respect from the others to truly perform the role. The other main characters in the series were: Kerr Avon (Avon), an amoral computer expert who refused to trust anyone— a real Anti-Hero; Jenna Stannis (Jenna), a smuggler who was the pilot of the Liberator during the first two series; Vila Restal (Vila), a cowardly thief; Cally, a humanoid telepath with kamikaze tendencies exiled from the planet Auron; and Olag Gan (Gan), a Gentle Giant, but only because he had a limiter fitted to his brain after he killed his girlfriend's murderer in a rage. Liberator was controlled by a sentient computer known as Zen.

The Federation was represented by an array of troopers, usually outfitted in black uniforms and gas masks. For the first two series, the Seven were pursued by Travis, a psychotic killer (and The Dragon) dispatched to "seek, locate and destroy Blake" by Big Bad Servalan (Jacqueline Pearce), the impossibly glamorous Supreme Commander (later President) of the Federation.

At the end of the first series, the Seven beat Servalan to the supercomputer Orac (originally presented as a Weapon of Mass Destruction but downgraded when it was kept on), which was capable of finding information on almost anything but was also programmed with the personality of its creator, an irascible old man.

The second series saw Blake determined to strike at the heart of the Federation by destroying its central computer— the series had a Story Arc, but often the quest for information about Star One was little more than a MacGuffin. The end of this arc shooed out some of the crew and introduced Del Tarrant (Tarrant), a former Federation officer who had deserted their ranks, and weapons expert Dayna Mellanby (Dayna). Despite the departure of Gareth Thomas, who played Blake, the series retained its title, with Avon now becoming the leader of the Seven.

The rather grim Season C finale was supposed to be the end of the series (and, indeed, was the last episode written by Nation), but a year later, the BBC brought it back, though without the active involvement of Nation. Another post-season reshuffle introduced the computer Slave and the female gunslinger Soolin. If anything, this final season was even darker than before, with one of the most surprising endings to ever grace a TV show.

Blake's 7 was clearly a strong if unspoken influence on Farscape, Lexx, and Firefly, as well as having a minor influence on Babylon 5 — J. Michael Straczynski noted that, in writing all of Season 3, he was doing something that hadn't been attempted in SF TV since Terry Nation wrote all of Season A of Blake's 7. It had a much stronger influence on the sequel series Crusade, which became even more obvious when information began to leak about plot developments that would have occurred had the show not been canceled. It was also directly cited by Joseph Mallozzi as an inspiration for Dark Matter.

In 2007, a new Alternate Continuity radio version was produced with some interesting twists to the story, and since 2011, Big Finish has been making audio dramas featuring the original cast. (For more, see the Audio Play page.)

Big Finish is also publishing a series of novels, including a trilogy about Avon by Paul Darrow which is largely set twenty years after the events of "Blake".

One of those shows that's perpetually on the cusp of a big-budget revival. A couple of scripts were ordered

for a possible TV revival at one point. ...Then it was gone again.

Then there was a possibility SyFy would reboot it.

They even did concept art

, but it appeared to lapse quietly back into Development Hell.

There's quite a strong element of sexual tension within the show, though much of it is beneath the surface, mainly because it was originally shown in an early evening timeslot. Fans note much subtextual Ho Yay in many of the male relationships. Amongst British SF fandom, Blake/Avon (or Avon/Blake— the order can be very important to fans) slash fiction is very popular, as is Avon/Tarrant. Even Avon/Vila is not unknown.