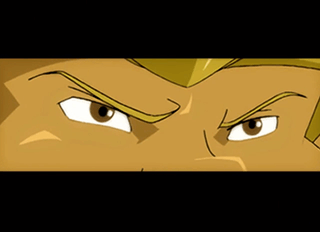 His hair and mouth are so ugly, they had to censor it!
"Can I get a letterbox format? ...Aww yeah, this is the director's cut!"
— Bo-bobo, Bobobo-bo Bo-bobo
Advertisement:

A Camera Trick where, in order to show focus on a particular thing, two black bars will emerge from the top and bottom of the screen in order to bring about some drama by changing the aspect ratio, Letterbox-like. Often done with eyes in order to showcase the intense stare of our hero, who nine times out of ten is staring down his opponent, but not exclusively. Said bars are often accompanied by a nifty sound effect. Possibly originates from attempts by producers of TV to recreate the same intense effect that Sergio Leone achieved with his massive closeups in his Spaghetti Western films — which don't work so well in non-widescreen shots.