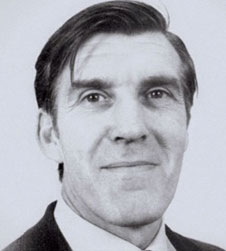 "I like wild, rich, hammy characters and Doctor Who is one of the few series where you can get away with them."
Advertisement:

Robert Colin Holmes (2 April 1926 – 24 May 1986) was a British screenwriter best known for his stint on Doctor Who: he wrote 18note A couple of these were effective page-one rewrites for other writers and went out under pseudonyms. The number is greater still if you count stories written by others that he heavily script edited. stories between 1968 and 1986, and served as script editor from 1974-1977.

These aren't just any stories though. Included in his work are some (some might say most) of the all-time classics of the show, including:

Yep, this is the guy who gave us the Autons and the Sontarans... and, as if that weren't enough, wrote the first appearances of the Master, quite a bit of Time Lord mythologynote  such as the idea of Gallifrey, 13 incarnations, the Eye of Harmony, and Rassilon and some of the best companions. His contribution to Doctor Who cannot be overstated and we're willing to bet at least one of his stories turns up on your top 10 list, probably more. Steven Moffat called him "the man who showed us how to write Doctor Who", while Russell T. Davies lamented how the BBC had no respect for him, and compared the first episode of "The Talons of Weng-Chiang" to Dennis Potter.

Many of his plots have a formula — crippled super-villain tries to regain power — but they vary widely from that initial idea. Holmes was very fond of Those Two Guys: many of his stories are advanced by a double act of supporting characters. His Holmesian Double Act in "The Talons of Weng-Chiang", showman Jago and police pathologist Litefoot, were so popular that a spinoff was briefly considered, and eventually realised in 2010 by Big Finish. He died before he could finish "The Ultimate Foe"; it would require others to finish that one off. It's also a shame that we never got to see "Yellow Fever and How to Cure It", a story planned for the original Season 23, which would have featured the Master teaming up with the Nestene Consciousness in Singapore.

Doctor Who wasn't the only British science fiction institution Holmes wrote for. He was offered the script editor's position on Blake's 7, which he declined, recommending Chris Boucher for the job. He eventually wrote four episodes for that series, including "Orbit", where Avon stalks Vila through a shuttle in order to throw him overboard to save weight.

Holmes joined the Queen's Own Cameron Highlanders in 1944, and was actually the youngest commissioned officer of the entire British Army in the Second World War, having lied about his age to join. After the war, he became a London policeman. His contact with court reporters led him to leave the Met and become a reporter himself, and eventually a television writer. A spec script sent to the BBC led to his first scripting job for Doctor Who, Season 6's "The Krotons."