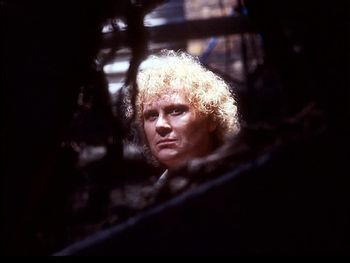 The Doctor gazes into the abyss, and the audience gazes back. At least we can't see his coat... (I think we're done with the coat jokes... for now.)
"In all my travels throughout the universe I have battled against evil, against power-mad conspirators. I should have stayed here! The oldest civilization: decadent, degenerate and rotten to the core! Power mad conspirators? Daleks, Sontarans, Cybermen — they're still in the nursery compared to us! Ten million years of absolute power: that's what it takes to be really corrupt!"
—The Doctor, finally fed up with the Kangaroo Court he's been thrown into, ripping into his own people's despicable acts with a lovely monologue.
Advertisement:

The one where Colin Baker gets fired.

This two-episode serial first aired from November 29 to December 6, 1986.

Picking right up where the previous story left off, The Ultimate Foe opens up with the Doctor being accused of genocide. The Doctor objects, and both he and the Valeyard get into a well-written argument that suddenly ends when Sabalom Glitz and future companion Melanie show up almost literally out of nowhere. When the Doctor asks how they got there, the Master shows up to torment the Doctor and everyone else— revealing that Ravalox was really the Earth, thrown out of whack by the Time Lords to cover up the theft of classified info from the Matrix (no, not that one! We've been over this!). The Doctor, realizing that the whole trial was part of the cover-up and supremely angered by this newly-revealed and unprecedented display of hypocrisy (given that this is his second trial by the Time Lords for lesser displays of interference, and that the first one ended in his execution), chews out the court, declaring Gallifrey's eternity of unchecked power a greater evil than any Monster of the Week he's ever faced. Furthering his gloating, the Master reveals that the Valeyard is really the Doctor.

Well, not exactly. The Valeyard is a piece of the Doctor: specifically, the Doctor's dark side, split off from around the last of his regenerations. Even when being specific, this origin is incredibly abstract (not that it wasn't entirely unprecedented among the production staff, having originally been a twist designed for the Master in what would've been Roger Delgado's swan song had he not died in a car crash).

Either way, the Valeyard flees into the Matrix and the Doctor and Glitz pursue. Inside the Matrix, the Doctor and Glitz are tormented by the Valeyard repeatedly until finally winding up in what can only be described as a world that was co-designed by MC Escher and Charles Dickens on PCP and acid. The Valeyard continues to gloat in his own way, while Mel and the entire judge and jury stare at the viewscreen like it's the Monday Night Football game.

Not much later, things go back to the courtroom, where the Doctor is convicted of his so-called crimes and will be executed. Only it's all an illusion, and the Doctor knows it's an illusion, but Mel doesn't know that he knows, so she runs into the Matrix to try and stop it all. The Valeyard gets all pissy about this, deciding to vanish for the time being. Meanwhile, Glitz and the Master decide to steal the records of the Matrix to make some cash in a story that, sadly, goes nowhere.

Finally, the Doctor and Mel find themselves face-to-face with the Valeyard, and his plans to destroy the current government of the Time Lords. Through a brief struggle, the Valeyard spits out technobabble about things not going his way and is finally defeated (OR IS HE...?!). The Time Lords saved, the random Time Lady presiding over the trial tells the Doctor that Peri survived and is living with King Yrcanos after his rambling that she would be his queen... for some reason. Mel and the Doctor leave together, presumably for him to drop her off somewhere for his future self to pick up later, so he can eventually meet her for the first time (See the Past Doctor Adventures novel Business Unusual... or maybe the Big Finish Audio The Wrong Doctors. Either one works.note In fact, The Wrong Doctors goes out of its way to avoid contradicting Business Unusual, so both can exist side-by-side), and the Sixth Doctor goes on to many, many more adventures, where th—

Anybody know the name of a good animator?

Though few really notice, the two episodes were written by four different people.

Part 1 was written by Robert Holmes and script editor Eric Saward together; because Holmes had died of a sudden disease before finishing Part 2, Saward finished that by himself and preserved the Bolivian Army Ending intended by Holmes. However, his draft was rejected by Producer John Nathan-Turner, who felt Holmes's ending was an easy excuse for the BBC to cancel the shownote The BBC had already tried it before, but it led into the eighteen-month hiatus that birthed The Trial of a Time Lord.. Having had one too many Creative Differences with Nathan-Turner, Saward quit the show, took the script with him, and threatened to sue if anything resembling his script went to screen.

The final draft of Part 2 was written by Pip and Jane Bakernote no relation to Colin, Tom or prolific 70s Who writer Bob Baker, all of whom are unrelated as well. of "The Mark of the Rani" and "Terror of the Vervoids"; because of legal problems with Holmes's estate and Saward, the Bakers were prohibited from even knowing about the original script, resulting in a finale with a massively different tone from its direct predecessor's.

This gap is also where the Doctor Who Expanded Universe really takes over the Sixth Doctor. Since this was his last appearance onscreen, Colin Baker and the writers were left with a blank slate on which they could entirely reinvent the Sixth Doctor, correcting many of the deficiencies of his television era, giving him massive amounts of Character Development, many more adventures with Mel, and eventually, giving him a real finale to hand the role over to Sylvester McCoy properly.

Hey, don't be sad ol' Sawbones Hex got drummed out of the series after only eleven stories. He was rescued by Big Finish! Take some spare time to look at the overwhelming collection of Sixth Doctor audios. And if you want to see more of him, start HERE. But sadly (or perhaps mercifully is a better word), you can't witness his coat in action as you listen to his stories; while audio can broadcast the dulcet tones of the Sixth Doctor, it doesn't do so hot where the visual department is concerned, let alone visualizing a coat that is a certified cornucopia of clashing colour hues.

And if you really want to know what happened to the Sixth Doctor, have no fear! Big Finish released an audio series in August 2015 to deal with his regeneration story.

The Sixth Doctor finally gives the Time Lords a good dressing down.

The Sixth Doctor finally gives the Time Lords a good dressing down.