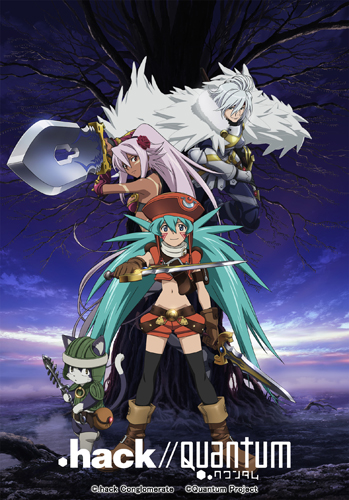 .hack//Quantum is a three episode OVA by Kinema Citrus and Bandai, created as part of the .hack franchise.

It's 2022, and The World is still as popular as ever. Three friends — Aida Asumi, Ikuta Iori, and Etou Eri — are, naturally, avid players of it. During a regular dungeon crawl, they accidentally ruin a guild's attempt to kill an infamous monster, The One Sin, and promptly get a bounty placed on their heads. During the ensuing chase, Aida happens upon a strange cat PC by the username of Hermit, who's looking for something...

It comes to a head when the chase lands them somewhere strange — an anomalous area called the Digital Prison, where Eri and a few others are PK'd and sent into a coma. Asumi and Iori are left to puzzle together why CC Corp is transferring comatose patients to one hospital, what a list containing the personal ID of the afflicted means, and who's behind the attacks...