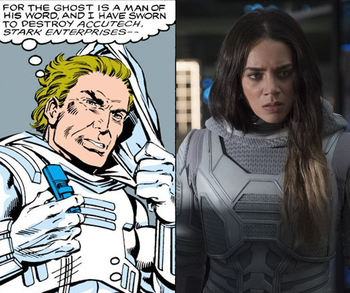 Sometimes the remake or reimagining of a work may involve Gender Flips due to societal changes on the Sliding Scale of Gender Inequality that, for example, would allow a formerly male Number Two to be an Action Girl instead. Occasionally, the Gender Flip occurs with a work that's already in development, or even in production (due to, for example, an actor's sudden unavailability or simply a last-minute casting idea). The results can be particularly interesting in these cases, as the written role may be almost completely unchanged from its original opposite-gender version.

Not to be confused with Gender Bender, though the terms are sometimes used interchangeably.note On this wiki, Gender Bender is when a character's sex is changed In-Universe through Applied Phlebotinum or the like. A Gender Flip is when a character's sex is changed through an adaptation, e.g. if a character is male in the book but is made female in the movie. If an Alternate Universe flips everyone's sexes, that's Gender-Bent Alternate Universe. When a song gets this treatment in a Cover Version, that's The Cover Changes the Gender.