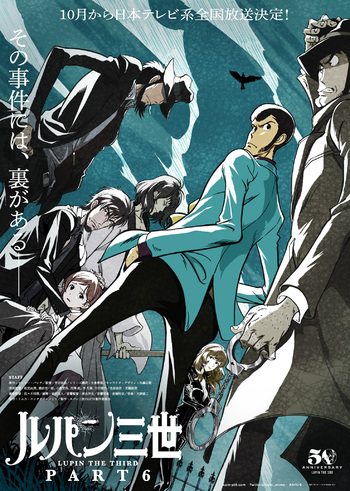 Lupin the Third Part 6 is the, well, sixth numbered entry in the Lupin franchise (The seventh overall counting The Woman Called Fujiko Mine series). Naturally TMS Entertainment still provides the animation. So far, it has two overarching arcs.

Lupin The Third VS Holmes (Episodes 1-12): He conquered Italy, he conquered France. So now Lupin turns his sights to the Great Britannia as his adventures lead him to London. As always, he finds himself getting into trouble while pursuing his targets be it from law enforcement, rival thieves, or underground criminal empires that secretly run the ruling government. But of course, he has his trusty (well 1/3 trusty) crew by his side: Daisuke Jigen, Goemon Ishikawa XIII and Fujiko Mine, while likewise having his persistent foe, Inspector Koichi Zenigata, ready and waiting to arrest him first chance he gets. Along for the ride this time is the one and only Sherlock Holmes (Or at least a descendant of his) and his assistant/ward, Lily, who get dragged into his capers as well. For the former, the resulting escapades could just be the thing to shake him from his funk and back into more serious cases in detective work. But danger is around every corner and both sides will have to work together if they wish to survive.

Witch and Gentleman (Episodes 13-): When Fujiko shows Lupin an auction listing of rare relics from all over the world, Lupin reacts to one in precitular: An unknown red diamond that used to belong in his grandfather's tightly secured mansion that has only been successfully robbed once. Determined to retrieve it, he goes to the auction only for it to be robbed by another group of armed women who all look the same. What is the connection to this woman, and the woman who was the only one successful enough to rob from the first Lupin.

Oh, and Lupin finally changed his jacket. Welcome back to the Green Jacket era!

The series premiered in October 2021, with a prelude special focusing on Jigen (in honor of longtime voice actor, Kiyoshi Kobayashi, retiring from the role after 50 years playing the character. Akio Ōtsuka has taken over the role starting episode one).