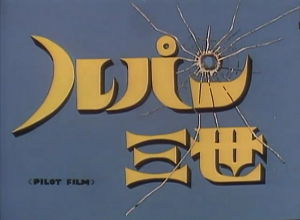 Where it all began
Advertisement:

Attempts to make Lupin III into an anime began as early as when the first few issues appeared in Manga Action. Together, TMS and Toho teamed up to produce a pilot film for the new anime. Despite being completed on schedule in 1969, the project still consumed a great deal of time and money. TMS and Toho could not come to terms about budget for the film. This (and several other problems) led to the Lupin project being cancelled. Risking another failure, TMS tried to pitch Lupin III again, despite its adult-oriented themes. In October 1971, TMS managed to sell the idea to Yomiuri TV. Yomiuri TV (and by proxy all Nippon TV affiliates) proceeded to air what would later become known as Lupin III: Part 1.

Unsure of what direction they wanted to go with Lupin, TMS made two versions of this (roughly) 12-minute film – a CinemaScope version, and a TV version. The animation for the two versions was mainly the same, but the voice cast was different in each, with only Kiyoshi Kobayashi and Eiko Masuyama, voicing Daisuke Jigen and Fujiko Mine respectively, in both versions. The primary point of the film was getting the audience introduced to the six characters. Yes, six. Lupin, Jigen, and Fujiko were supposed to be allies, while Goemon and Inspectors Zenigata and Akechi were supposed to be antagonists.

The two versions of this pilot film were later released in 1989 as a part of the Lupin III Secret Filesnote  (シークレットファイル Rupan Sansei — Shīkuretto Fairu) collection. Discotek Media included both versions in their 2012 release of the first TV series. Overall, the animation style and most of the voice acting is unique to this pilot film.