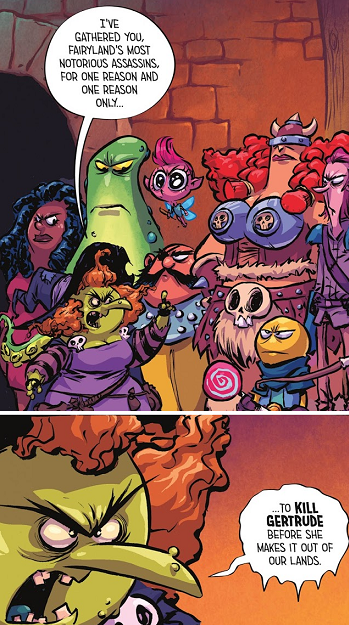 A Carnival of Killers occurs when a villain either hires the best assassins from around the world and sends them after the hero, or puts out an open contract on the hero's head that attracts a variety of assassins. A typical Carnival of Killers will involve a large collection of assassins with radically different styles (e.g. a Cold Sniper, a Mad Bomber, etc), and sometimes will include last season villains that have since fallen below the Sorting Algorithm of Evil's current threshold. Sometimes one of the assassins will decide the best way to win the bounty is to take out the competition before taking out the hero.
Advertisement:

In a story that wishes to evoke an "international" flavor, all the killers may make no secret of their creepy foreignness and might even dress as mildly absurd ethnic stereotypes. It's not unusual for some of them to be political radicals or even terrorists who are taking a break from their usual "hobbies."

Compare Legion of Doom and Quirky Miniboss Squad. Not comparable to Circus of Fear, unless being chased by the world's top assassins posing as clowns is the hero's worst fear.

Compare and contrast Ragtag Bunch of Misfits, who are usually the protagonists and/or the focus of the story who are just as radically different individually as this trope.