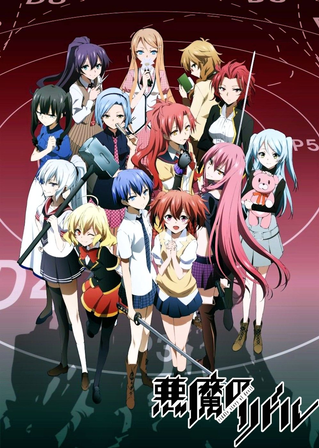 Akuma no Riddle, also known as Riddle Story of Devil, is a manga series written by Yun Kouga (creator of Loveless and character designer for Mobile Suit Gundam 00) and illustrated by Sunao Minakata. It received an animated adaptation produced by Diomedea on April 3, 2014 as part of the Spring 2014 Anime season.

Myojo Academy is a distinguished integrated campus equipped with a curriculum that ranges from elementary to college and strong connections to a large number of influential people. Despite its reputation, however, few in the public know about Myojo's Class Black, a secret, thirteen-student high school class that accepts enrollment at irregular intervals, formed for purposes aside from education. Namely, a game where twelve killers disguised as students compete to be the first to assassinate a target within the class.

Tokaku Azuma, one of Academy 17's elite assassins, is chosen by her instructor, Kaiba, to participate in Class Black upon the request of Myojo Academy's Board Chairman. When she arrives, she meets the target, Haru Ichinose, who has the appearance and disposition of a regular high school girl, but it quickly becomes apparent that Haru is just as far from normal as anyone else in the class when Tokaku learns that she's lived her whole life as a target for assassination. In the process, Tokaku decides to go against the original plan and become Haru's sole protector against the remaining eleven killers of Class Black.

Akuma no Riddle contains examples of: