Film / Things to Do in Denver When You're Dead 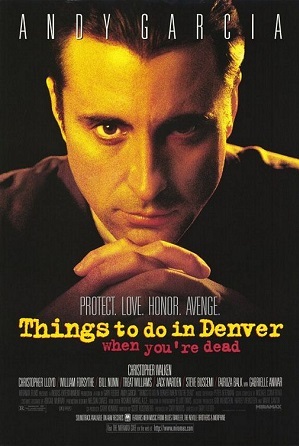 Things to Do in Denver When You're Dead is a 1995 crime film directed by Gary Fleder and starring Andy García, Christopher Lloyd, William Forsythe, Treat Williams, Steve Buscemi, Christopher Walken and Gabrielle Anwar. The title was inspired by a song by Warren Zevon from his album Mr. Bad Example.

Andy Garcia plays a former mob man who tries to turn straight by starting his own business, which produces taped messages for the terminally ill and dying. His business goes into debt, which later brings him into having to do one last favor for his former boss: scare off his son's ex's current boyfriend. A loose team of former acquaintances is then assembled to do the job, but it turns out their target is smarter than they think.