Fanfic / A Knight's Tale as Inquisitor 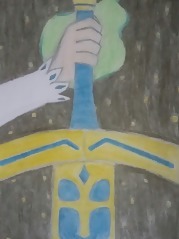 Bare Your Blade And Raise It High
"Spread the word of the Inquisition. Let it be known that I, Arturia Pendragon, Sealer of Rifts and Wielder of the Holiest Sword, will seek to fight the chaos surrounding this land. If you care for your home, your families, and friends, and if you sought the righteous endeavor for this world's future, join our cause. That we may one day sow the sky back together. I care not of any particular character, what I need are men and women who will risk their lives, as I aim to do the same. To band the people all across Thedas, our resolve shall be our sword against the demons. Will you help us?"
— Arturia Pendragon
Advertisement:

A Knight's Tale as Inquisitor

is a Fate Series and Dragon Age crossover by CrafterofTales.

After being forced to destroy the Holy Grail at the end of the Fourth Holy Grail War for unknown reasons by her Master, Arturia Pendragon is devastated and overcome with grief and regret as she reflects on her own shortcomings in her role as both a knight and king in the Grail War and her reign in her previous life. Arturia then closes eyes, expecting to return to the hill where she had fallen, and wait to be summoned once again for another war.

...Except that's not what happens in this tale.

After escaping some mysterious and otherworldly place thanks to the guide of the supposedly dead Irisviel, the King of Knights wakes up at the start of Dragon Age: Inquisition; finding herself in chains and accused of being responsible for the murder of the Divine Justina V and countless others due to an explosion that killed everyone at the Conclave that was meant to end the Mage-Templar War with her being the only one to have miraculously survive the event.

After managing to stop the Breach from expanding any further thanks to the otherworldly, magical Mark embedded in her hand, Arturia joins the newly-resurrected Inquisition and sets out to put a stop to the chaos that is raging across Thedas and bring order to the world once more, while at the same figuring out just how and why is she here in the first place.

To put it simply, this crossover asks the question of what if you placed Saber in the role of the Inquisitor. This is the result.

The story can also be found on Spacebattles Dot Com here: A Knight's Tale As Inquisitor

A Knight's Tale as Inquisitor provides examples of: