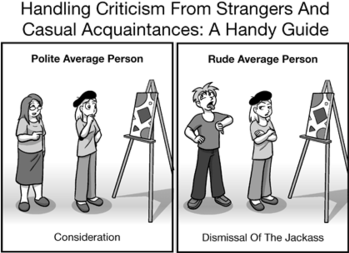 Criticism:
"Okay, I've read your script, and I have a few things to say about it. It needs work, but you've got something going here. I wasn't impressed by the car chases, but those aren't my thing. But I do know that cheesy one-liners aren't really done anymore, unless you're spoofing those kinds of movies, and this isn't a parody. I did like the romance scenes. You should probably expand that relationship. These kind of movies don't do relationships well, and this would help your movie stand out."
Advertisement:

"Okay, I've read your script, and it's terrible. You should just use it for toilet paper. Nobody likes car chases anymore, and your crappy jokes make Arnold look like Shakespeare. You thought that shit was funny? Oh, the love scenes were good. I always knew you were gay."

While flames are designed to put people down, constructive criticism is meant to help an artist improve his/her work. It's rarely shown in fiction, but it is vital to the growth of an artist or writer.

This kind of criticism is about being honest, clear, and considerate in your comments. In particular, a respectful tone is crucial in proper constructive criticism. There is no handholding, and this does not mean making only positive comments; it is not constructive to say a work is good if you honestly thought it was bad. Proper critique, however, also avoids unmitigated Brutal Honesty. The ideal Constructive Critic is a master of Verbal Judo: honestly and directly pointing out flaws while simultaneously highlighting strengths and unexplored avenues of a work, all while maintaining a neutral to positive tone. In short, you are trying to help the artist improve both positively and honestly, not shame them into improving.

This is very, very hard to do. For one thing, you have to be aware of your biases, and admit them. There are times when you are asked for criticism, but are probably not the best person to be asked about something. For another, you could make claims that turn out to be wrong, even if you thought otherwise at the time. Finally, some simply Can't Take Criticism anyway- beware those showing signs of being Sunny Sunflowers or Wide Eyed Idealists in particular.

Yet it's still the form of criticism most likely to actually get results. In fact, most good artists even give this to themselves, hence the phrase "I'm my own worst critic."

You'll notice that most people don't actually understand the concept of Constructive Criticism. As you'll probably learn if you take a college-level creative writing course, one of the most important things about Constructive Criticism is don't rewrite the work to suit your own desires. The point is to make it into something that the intended audience will like. This is actually one of the biggest things that people need to learn about being constructive, because it is not very constructive to try to suggest the author to write a work into something that you want to enjoy, or to review it based upon what you think it could have been. You will notice this as a trend in people who are members of the Periphery Hatedom, especially if they have a Bias Steamroller, and those with extreme Fan Myopia.

Unfortunately, finding criticism is rather hard in the internet age. It's easy to get criticism on the internet, but when it's mixed with the GIFT, people will often take that as an opportunity to act like a complete dick and call it criticism. If someone walked up to you and asked you for critique and you gave a very rude-sounding critique, then they won't ask you again and you won't get to critique anything. On the internet, there's loads loads more random people and works to critique, especially since you can find it anytime you want.

One method of giving Constructive Criticism is the "Feedback sandwich" method. You begin by saying what the person did right, then delve into what they need to improve on, and finish off with a comment on what else they are doing right, often including comments on why it works. The "Bread" are the compliments, while the filling is the criticism, and you often season it with explanations as to why you come to the conclusion you did. This method works because starting off with the criticism is often what leads to people instinctively taking it as a form of attack, and/or feeling like they did nothing right. Starting off with an observation on what they are doing right lets them know that you do respect them and are empathizing with them as a creator. This, in turn makes them far more open to listening to you when you point out the flaws or shortcomings. Finishing it off with another comment on what they did right also leaves a better taste in their mouth. It has been proven that when people are "proven wrong" so to speak, it often triggers the fight-or-flight response - the "Feedback sandwich" method helps to mitigate this by letting them know what they did right and that you are there to help.

Now you might be wondering if Constructive Criticism is appropriate for this site. Of course it's better than Complaining About Shows You Don't Like, but describing tropes and listing examples doesn't actually call for criticism. There are some places where it can fit, particularly in the Trope Launch Pad. You can help a new trope a lot more with this kind of criticism than insulting the new trope, the troper that posted it, or that troper's mother.

No examples, please. We're just defining the term. But any wicks must be In-Universe Only.