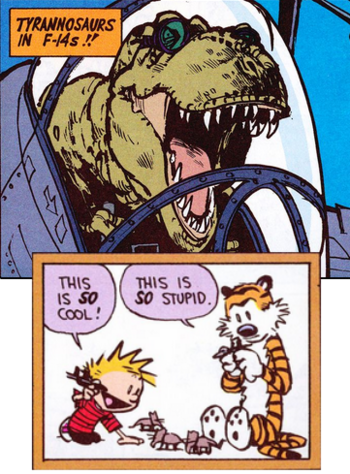 Both are correct.
"So, ten out of ten for style, but minus several million for good thinking, yeah?"
— Zaphod Beeblebrox, The Hitchhiker's Guide to the Galaxy
Advertisement:

The intersection of the sets "Stupid things" and "Awesome things", which, surprisingly, are non-disjoint sets. A field mainly occupied by the obsessions of 8-year-old boys, but one that can be surprisingly fertile for all that.

Examples should be confined to things that are acknowledged in-universe as being stupid or ridiculous, yet are treated as being awesome or cool despite or because of this.

Differs from So Bad, It's Good and So Cool, It's Awesome by being the localized case; those apply to the whole show. See also Achievements in Ignorance, a Sister Trope: when the "impossible" is achieved due to not knowing it's impossible; frequently, cases of Cool, but Stupid are acknowledged as being stupid, but carry on regardless "just to see what will happen". Compare Awesome, but Impractical.