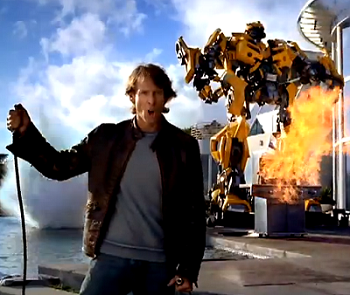 "Hi, I'm Michael Bay and I demand things to be awesome!

While his detractors (and most critics, for that matter) claim his films are juvenile or impossible to follow, and his name has grown quite pejorative in art-house circles, a lot of filmgoers don't seem to mind, and his films are routinely box-office successes. If you look over his interviews, especially for Transformers, you'll see that he is more than aware of this reputation, and even makes fun of the fact. On one occasion, he stated, "I make movies for teenage boys. Oh, dear, what a crime."

Bay got interested in action films when he set firecrackers on a train set, filmed it with his mom's camera, and got grounded — an approach which seems to have continued into many of his higher-budget movies even today. As a teenager in the early '80s, he was a clerk for Lucasfilm and worked on Raiders of the Lost Ark. He thought it would suck, but ate his words when he saw the final product, and that got him interested in directing.

He started out directing commercials and music videos (most notably the very first "Got Milk?" ad, and "I Would Do Anything For Love" by Meat Loaf) before Don Simpson and Jerry Bruckheimer hired him to direct Bad Boys. The film was a modest hit and kicked off Bay's film career, after which The Rock (one of his more well-liked movies) came out and solidified him as someone capable of making energetic, entertaining and profitable action films. It was around the time Armageddon came out that the polarized responses that would continue to follow Bay's films began rolling around.

He's well-known for being a tough general on set, as he shoots and moves at a very fast pace. The movies he makes would also probably cost 30% more and take another year to film in the hands of another director (which, when you consider the amount of stuff that's demolished, smashed and blown up in his movies, is a damn impressive thing). Despite a belief that everyone in Hollywood hates him, his ability to work within a budget and demand a strong work ethic from his crew and actors has earned him a great deal of supporters just for turning filmmaking into an actual work experience. He is ranked among the most elite directors in Hollywood today, having strong relationships with friends James Cameron and Steven Spielberg.

However, his aggressive directing style and occasional jerkish behavior has earned him some enemies. People like Bruce Willis, Ewan McGregor, Scarlett Johansson, Megan Fox (who compared him to Hitler and Napoleon in an interview), Kate Beckinsale (who claimed that Bay made her feel "ugly" on the set of Pearl Harbor), and Ben Affleck have spoken out against Bay and refuse to work with him again.

In 2008, possibly to hype Postal, Uwe Boll called out Bay (among others) for his supposed lack of talent (at least from Boll's point-of-view) while insisting he's "the only real genius in the whole fucking business." Bay's response

While he may be hated by many critics and film buffs, you should always remember one thing: You mess with Michael Bay and you mess with America!

Compare Roland Emmerich. If they collaborated, Hollywood would explode.

The Films He's Directed To Date:

The Films He's Produced To Datenote through his production company Platinum Dunes:

Tropes about him or his works: