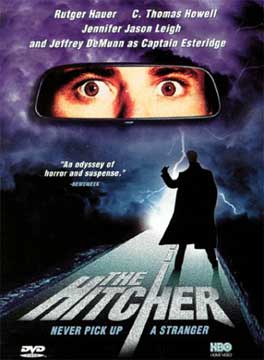 Once you pick up The Hitcher, you'll never pick up another!
— The original 1986 trailer's slogan
Advertisement:

The story is about a young man named Jim Halsey (Howell), who's driving a car through the US of A. He decides to go against his mother's warnings and pick up a hitchhiker, John Ryder (Hauer), who then turns his next few days into a waking nightmare.

It got a sequel in 2003, The Hitcher II: I've Been Waiting, with C. Thomas Howell reprising his role as Jim, and this time featuring Jake Busey as the murderer. It was remade in 2007 by Platinum Dunes, with Sophia Bush, Zachary Knighton, Neal McDonough and Sean Bean. See also Highwaymen, its Spiritual Successor by the same director.

The Hitcher contains examples of: